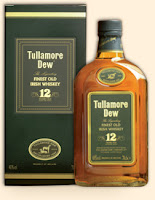 Happy Saint Patrick's Day! I'm not Irish, and I don't like artificially colored beer, but I do enjoy the occasional glass of Irish Whiskey, so I thought I'd review Tullamore Dew's 12 Year Old Special Reserve bottling in honor of the holiday. Tullamore Dew's standard bottling is the world's second best selling Irish whiskey (behind Jamison), and the brand is owned by William Grant & Sons and produced at Pernod Ricard's Midleton Distillery alongside Jamison, Powers, and other brands. While the standard Tullamore Dew is heavily advertised and can stand up to any other mainstream Irish whiskey, I hadn't heard much buzz about their 12 Year Old expression, so I thought I'd give it a try.

At $35.99 per 750 mL bottle in Pennsylvania, Tullamore Dew 12 Year Old Special Reserve isn't a cheap Irish whiskey. Along with being aged 12 years, this whiskey also has the distinction of being aged in used bourbon barrels and finished in Oloroso sherry barrels. It also claims to have a higher malt whiskey content (and therefore lower grain whiskey content) than other Irish whiskeys which should give it a fuller flavor. To me Irish whiskeys are meant to be smooth, easy-drinking, and very approachable, and achieving that in a 12 year old whiskey that will also appeal to those looking for more distinctive flavors is quite a challenge. Tullamore Dew does a good job of meeting this challenge, and my overall impression is good, although I'd like to try their 10 Year Reserve as well to see how much difference there is in the two.


Color: TD12 is very light in color for a 12 year old whiskey of any type, but roughly average color for Irish whiskeys in general. I would describe it as being the same pale, golden color as a light beer.

Nose: The nose for Tullamore Dew 12 Year is light overall, but quite malty for an Irish whiskey. There's a bit of lemony citrus aroma along with some ethanol and grassy notes.

Flavor: The flavor is very clean and subdued for a 12 year old whiskey. The dominant flavor is malted grain, and less oak than I expected. There are hints of vanilla, and some earthy flavors, but I can't really detect much fruitiness or spice from the sherry-cask finish.

Finish: The finish continues the malty theme and is even a bit peaty. There are also more of the earthy flavors, and the finish is quite smooth and medium in length.

Overall Tullamore Dew 12 Year Old Special Reserve is a good Irish whiskey and has more malt character than most, but I'm not sure that it's worth the premium price when compared to other maltier Irish whiskeys like Bushmills. It's Saint Patty's day though, so I'll have another glass and say Slainte!