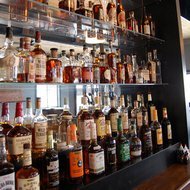 The window at Longman & Eagle, the hip whiskey bar in Chicago's up-and-coming Logan Square neighborhood, says simply: "Eat Sleep Whiskey." That seems like a pretty simple slogan, but it concisely captures most of what's going on at this watering hole where I had dinner last weekend.

Let's start with the drinking. Longman & Eagle has an epic selection of whiskeys behind the bar. There are so many bottles that many of them have been turned sideways so that you can't even identify the labels. Thankfully there's a well-organized list to choose from so that you don't have to rely solely on your eyes scanning the bar shelves. The drinks menu lists numerous craft beers, wines, and cocktails - both whiskey-based and other - along with a complete list of the whiskey selections available. The whiskeys are categorized by type (bourbon, scotch, etc.), but there's also a great menu section entitled "Whiskey For Drinking" where all the 'affordable' whiskeys are listed again - each one available for only $3 per shot. Each whiskey on the menu is offered in 1.25 oz or 2 oz pours, and the prices seem to be fairly reasonable across the board. One thing I didn't care for was the glassware that the whiskeys are served in - basically a straight-up-and-down shot glass. It's fine if you're doing shots of Jack or Jim, but for some of the higher-end tipples on the list a nicer glass would have made me feel better about dropping the big bucks.


While I was there I tried two craft whiskeys that have been on my 'to taste' list for a while and which I can't find in Pennsylvania. First I tried Benjamin Prichard's Double Barrel Bourbon from Tennessee. Prichard's distillery is known for its rum, but his whiskey is not bad either. It was flavorful and very woody, but a bit sharp for my tastes. I definitely felt every bit of the heat from its 90 proof strength. My wife took sip and thought it was super smooth though, so what do I know. I also tried Templeton Rye, the limited release rye out of Iowa that bills itself as "Prohibition era whiskey." I really liked this one and thought it had the perfect amount of rye assertiveness mellowed out by woody vanilla and caramel flavors. It sipped very nicely alongside the super-thick pork chop that I had for dinner.

Speaking of dinner. I was a bit disappointed in that, but I'll move along since this is a whiskey blog and I'm not here to talk food. Besides, even if Longman & Eagle was serving reheated Burger King kid's meals it would be worth the trip for the whiskey program and mixed drinks alone.

Finally, there's that 'sleep' thing in their window logo. They're not just saying that, Longman & Eagle has six upstairs rooms available for overnight stays...how convenient. They serve brunch too, so you could in theory spend your entire weekend at this bar. You'd need several weekends to make a dent in that whiskey list though.

nice idea.. thanks for sharing.