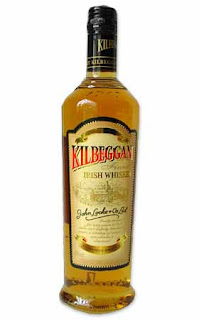 Irish whiskey is very popular among my circle of friends, and in Philadelphia in general. I would say the most common whiskey I hear people ordering around town is Jameson, with Bushmills also getting plenty of love.

While it's definitely popular, I have always found the lack of choice among Irish whiskeys to be a bit boring. At any given bar you're lucky to find three or four different brands of Irish whiskey, even if they stock dozens of Scotch or Bourbons labels. This lack of variety is largely due to the fact that Ireland today boasts only a few distilleries, with most owned by two large conglomerates. You can read a bit more about the history of Irish whiskey in this post, but today's tasting is about a slightly less common, and delightful whiskey called Kilbeggan produced by the "distant third place" distiller of the Irish whiskey world - Cooley. Cooley is cool because it's the only major Irish whiskey maker that is still independently owned by Irishmen.


Kilbeggan is a storied name in Irish whiskey lore, and the Old Kilbeggan Distillery claims to be the oldest continually licensed distillery in the world. It has been legally producing whiskey off-and-on since 1757, and probably for years before that in an unlicensed capacity. The distillery was closed in 1953, a casualty of the consolidating Irish whiskey industry, but the physical property and distilling license were maintained by local residents. In 1988 the property was purchased by Cooley and Kilbeggan whiskey began flowing again. Currently Kilbeggan whiskey is actually distilled at the Cooley distillery in County Louth, and aged at the Old Kilbeggan site, but by 2014 you'll be able to purchase Kilbeggan whiskey that has been produced fully on-site in the refurbished old pot stills from Kilbeggan's heyday. For more on the very intriguing history of Kilbeggan and Cooley check out their respective websites, but for more on how Kilbeggan Irish Whiskey drinks, keep reading.


Color: Kilbeggan is one of the palest, clearest whiskeys I've encountered in terms of color. It has a pale brown color in the bottle and an even lighter shade of amber in the glass.

Nose: The nose on this whiskey is very light and clean with only faint hints of citrus, and a modest grainy, woody tinge to it.

Flavor: Given the light color and clean nose, Kilbeggan has a surprisingly rich and complex taste. It comes out of the gate strong with a nice tart bite containing hints of lemon, pine, and spice. After this bite wakes you up you go on to taste toasty oak flavors and just enough sweetness to smooth it all out. My first sip of Kilbeggan wasn't as smooth as most Irish whiskeys, some of which are too smooth by my standards, but it gets smoother and rounder after a couple sips.

Finish: Kilbeggan has a tart finish that lingers for a long while before slowly fading. It really coats your mouth with the citrus and spice notes for a while encouraging nice, slow enjoyment of this legendary whiskey.

My final verdict is that Kilbeggan is more complex and flavorful than most of the mainstream Irish whiskeys, and at about $20 per bottle it's competitive in terms of price as well. It's a good choice if you've always found Irish whiskey a tad too tame for your tastes, and it certainly stands out more on the shelf than that same-old bottle of Jameson that everyone else is drinking from.

I agree that there is rarely enough choice in the Irish range - which is why you should also keep an eye out for The Wild Geese Irish Soldiers & Heroes Irish Whiskey collection. The range has 4 expressions: The Classic, Rare Irish, Limited Edition & the Single Malt - all really excellent and full of flavour!