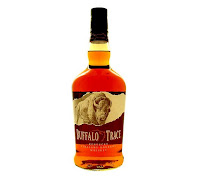 Buffalo Trace distillery in Frankfort, KY flies bit under the radar compared to some of the other bourbon distillers, but it always seems to be highly regarded by folks who know their bourbon. I rarely see it stocked at bars and restaurants around Philadelphia, and it's certainly not a household name like Maker's or Jim Beam but it is sold in some Pennsylvania state stores around here. I somehow managed to make it to this past weekend without ever trying Buffalo Trace, but after a few tastes I'm starting to understand what all the subdued buzz is about. It's a very solid, low-key bourbon that's an outstanding value compared to some of the more highly marketed and higher priced bourbons on the shelves.

Buffalo Trace has only been around as a brand since 1999, but it's produced at the Buffalo Trace distillery which has been around in one form or another for about a century and half. It was formerly known as the George T. Stagg distillery and produces the George T. Stagg line of high-end bourbons as well as the Blanton's, W.L. Weller, and Eagle Rare labels. All of these bourbons also follow the 'substance before style' path of Buffalo Trace, winning awards and accolades, but avoiding being over-hyped. So, enough hype how does BT drink?

Color: Buffalo Trace has a very nice golden amber hue and appears thick and sticky when swirled around in the glass (in a good way that implies a certain richness).

Nose: When I opened the bottle a bouquet of rich, fruity dark berry aromas jumped out at me right away. After pouring a glass the nose was more ethanol and honey, but the fruity blackberry aromas came back as the glass sat a bit and opened up. There were also hints of vanilla and grain in the nose.

Flavor: Buffalo Trace feels nice and creamy in the mouth, not watered down or weak, and it's immensely smooth for a 90 proof whiskey without even a hint of burn. The dominant flavors are of oak: vanilla, honey, and caramel. There are also some peppery spice flavors and a hint of the blackberries that come through so nicely in the nose.

Finish: This is where BT really surprised me for a $20 bourbon. The finish is long and much more interesting than the actual taste. All the same flavors are present, but the peppery spice really hangs on for a long time, and there are hints of corn and more vanilla. Again there's no alcohol burn, making this a great one to sip slowly and really savor.

Overall I have to agree with all bourbon-heads who have told me that Buffalo Trace is one of the best deals in bourbon. A great bottle to keep around as an everyday whiskey that will never disappoint.

Nice post! I also found this to be well-reviewed in the whiskey-blogosphere which is what made me decide to buy it, so maybe that makes me a little tougher on it. I think it's a very good bourbon for $20, but I actually find it a bit unbalanced toward the astringent side, so all-in-all it's not my favorite, but the spice flavors are nice. Still, I think if I didn't have such high expectations for it, I would like it more considering the price.