Better late than never I say with my final Irish whiskey review of the St. Paddy's season! Knappogue Castle Twin Wood 16 Year Old Single Malt Irish Whiskey (KC16) is more-or-less a 2 years older version of the KC14 that I wrote about last week. It's a triple-distilled all-malted-barley Irish whiskey that was aged first in ex-bourbon barrels and then finished in Oloroso Sherry wood. It's a limited production product, and just as hard to find as the KC14, but at scarcity-induced prices of $75 to $100 depending on where you get it can it possibly be worth the premium over the $46 Knappogue Castle 12 Year Old that was just devine? Also, not to be a grump, but when a bottle gets over about $50 I start to lose interest if it's bottled at a standard 80 proof. Not that there's anything wrong with 80 proof if that's where a given whiskey shows off its best flavors, but I usually think going with 80 proof is more a sign of laziness or of going with whatever is available rather than a conscious choice driven by the character of the liquid. When I'm paying big bucks I want to know that I'm paying for a fully thought-out whiskey.

Color: KC16 is a nice, full, caramel brown color with rather thick, sticky legs. You can certainly see the two years of extra age compared to the KC14, and the slightly lower proof may account for the thicker look.

Nose: Initially the nose is very earthy and malty with just a hint of ethanol that I didn't detect in the other two Knappogue Castle whiskeys I sampled. I gradually picked up dried apricots, ripe dark fruits, and oaky vanilla notes. The vapory ethanol aroma was really somewhere between ethanol and citrus zest, and it disappeared after sitting out for a bit anyway. After adding a splash of water the nose didn't change much, just got fainter.

Flavor: This KC16 is certainly the "oakiest" of the Knappogue Castle range, with rich bourbon-barrel flavors of vanilla, brown sugar, and cinnamon. There are also some light grain flavors like wheat-y bread, and bit of orange zest after a few sips. Adding water makes the flavor a bit sweeter and fruitier and brings out the white grape juice flavor that I found so unique in the younger Knappogue Castle whiskeys.

Finish: The finish is clean and relatively short with no burn and not much lingering flavor. Just a bit of that citrus flavor that kicks around for a bit.

Overall this KC16 is a top notch Irish Whiskey that stands apart from the crowd in all the right ways. The only downside is that the KC12 and KC14 whiskeys do the same thing at much lower price points, so finding the value in this one is a bit trickier. If you happen across it and feel like splurging though, you won't be disappointed.

And the names just keep getting longer! The next Irish Whiskey up in my St. Patrick's Day run-up has a name almost as long as the 14 years it has spent in barrels. Knappogue Castle 14 Year Old Twin Wood Single Malt Irish Whiskey (KC14) is an older, sherry-finished whiskey from the same folks who brought us the Knappogue Castle 12 Year Old Single Malt Irish Whiskey (KC12). It has some of the same delicate, fruity notes that I loved so much in the KC12, but is a bit woodier and has some heavier, darker fruit flavors owing to the use of oloroso sherry barrels in addition to ex-bourbon barrels. At 92 proof and non-chill-filtered, the KC14 is also a bit stronger and more 'untamed'.

Color:  KC14 is a clean golden wheat color. It's remarkably sharp and bright looking with medium legs when you give it a swirl.

Nose: At first the nose is a bit scarce with light honey, oak, and citrus notes just peaking through. Given a few minutes aromas of malt, wet grain, and buttered corn start to come out. After a few sips the nose continues to move from light and fruity to an earthier vibe, and after adding a splash of water it gets downright musty - like entering a wood-paneled room that has been closed off for a while. If you haven't experienced a whiskey that changes in the glass with time and water this is a good showcase for that.

I just came across this event and it sounds like a good chance to taste a bunch of whiskeys for just $40...2014 Whiskey Rebellion Philadelphia

There isn't much info about the format, and the TLA is not what I think of as the ideal venue for a good whiskey tasting, but the Boston event put on by the same people was extremely well-received, so maybe it's worth checking out if you're in Philly on April 13th. 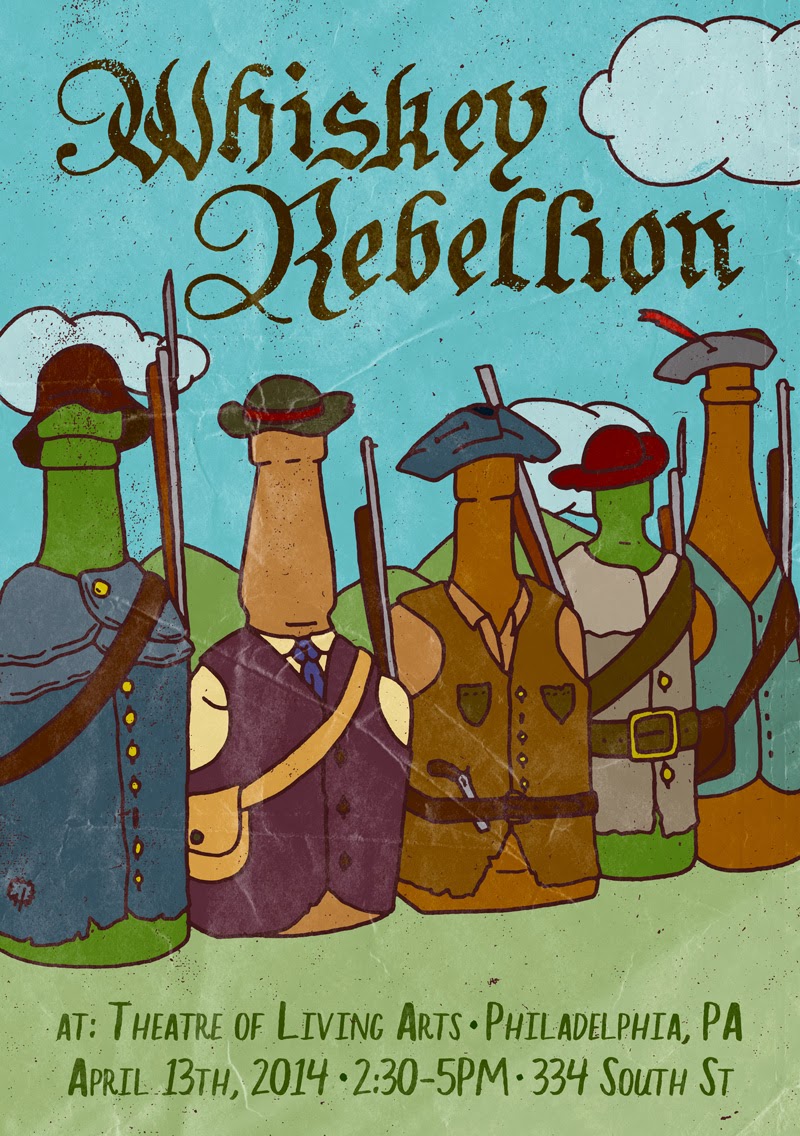 For my second Irish whiskey review heading into St. Patrick's day (there are at least two more coming soon...) I'm reviewing Knappogue Castle 12 Year Old Single Malt Irish Whiskey (KC12). That's a mouthful of a name, but it's worth remembering because each part of that long name tells you something about this unique whiskey. Also it is very much a mouthful of a whiskey - one of the most flavorful and interesting Irish whiskeys I've had in a while.

Like most traditional Irish whiskeys, KC12 is triple-distilled which serves to give it a cleaner, lighter, more refined starting point than your average Scotch which is only distilled twice. It's aged for 12 years in used bourbon barrels which is also very traditional for Irish whiskey. Unlike most most mainstream Irish whiskeys KC12 is a single malt - meaning it's 100% whiskey made from malted barley as opposed to a blend of whiskeys made from malted barley, un-malted barley, and sometimes other grains like wheat or corn. Being a single malt, this is a bit pricier than many Irish whiskeys at about $46 per bottle, but compared to single malt Scotches of the same age that's a bargain, and for my money this is much more interesting than most Scotch at the same price point. Knappogue Castle also stands apart from most Irish whiskeys because there is no caramel coloring added. Because of this you may notice a slight variation in color from bottle-to-bottle, but I appreciate the distiller giving us an honest look at the whiskey's natural color.

St. Paddy's day is coming, and will hopefully bring spring weather with it. Although I'm not a big Irish Whiskey drinker I do like to try a few this time of year, especially since their lighter flavors tend to go well with the arrival of spring and make for a nice break after a winter of rich, heavy bourbons and Scotches.

Clontarf 1014 is a whiskey that's been around for a few years, but is still not super common in bars or liquor stores - at least in my area. This is the first time I've tried it, and I have been pleasantly surprised with a more complex dram than you'd expect from a $20 Irish blend. The name was a bit clunky to get used to since I couldn't figure out what the 1014 stood for, but after a little research I now know that it was the year that the Vikings were driven from Ireland - sounds to me like something worthy of a celebratory drink!

Color: Clontarf 1014 has a deep, honey-amber color with light legs. It's a bit dusty or opaque when you hold it up to the light, giving it a nice weighty look in the glass.

Nose: When you have this whiskey neat, the nose is mostly solvent and boozy smells. You can pick up some grain notes and faint honey and lemon rind. Water brings out a bit more oak and honey, but it really opens up with a cube or two of ice. Once it chills you lose the boozy solvent aromas in favor of some good malty heft that's much more interesting. 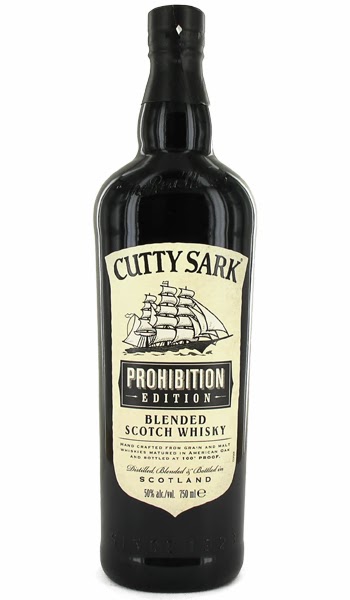 Over the past few years Prohibition themed bars, cocktails, TV shows and even clothing styles have taken America by storm. From the smash success of Boardwalk Empire to the popularity of 'moonshine' style white whiskeys, if it can be related to Prohibition it seems to be a big seller. Not to be left out, some of the most venerable names in whisky are drawing on their history to bring us whiskies inspired by Prohibition-era styles.

The latest entry in the Prohibition niche is Cutty Sark Prohibition Edition Blended Scotch. Traditionally, Cutty Sark is a solid, if oft-overlooked blend here in the U.S. and it has certainly fallen off the public's radar a bit since the time when it was LBJ's favorite tipple at the White House. With Prohibition Edition (or Cutty Pro as they're calling it for short), Cutty Sark is breathing some fresh life into the brand and bringing us a unique, full-flavored blended whisky at a very reasonable price point (about $30/bottle).