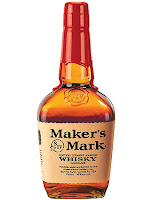 On the same trip during which I visited MB Roland Distillery I also had a chance to tour the Maker's Mark Distillery in Loretto, KY about an hour south of Louisville. Maker's has long been my go-to whiskey when I'm at a new bar or restaurant because it is consistently delicious - straight-up, on the rocks, or as a Manhattan - and it is available almost everywhere you go. Seeing the place where this iconic, red-wax-capped whiskey is made would be a nice treat indeed.

I missed the first few minutes of the 3:30pm tour because this distillery is really tucked away into the rolling hills of Kentucky's bluegrass region, and it took a few minutes longer to get there than my GPS predicted. I was cutting it close to begin with because I couldn't help but stop at for a few minutes at the Abraham Lincoln Birthplace National Historic Site which you pass on the way to Loretto when approaching from the south. As I rolled through the small town of Loretto I could tell we were getting close to the distillery because I started to see large complexes of barrel-houses along the side of the road. The red-and-black paint-jobs on the barrel houses indicated to me that they must belong to Maker's Mark, but it was still a winding 10 minute drive from the time I saw the first barrel-house until I crossed a small bridge across a burbling brook and saw the sign welcoming me to the Maker's Mark Distillery.

Maker's Mark is hands down the brand of whiskey most associated with a color - red. Just like the barrel houses along the approaching country roads, all of the buildings in the distillery complex are painted in the red-and-black color scheme that serves as a constant reminder of the red wax on the top of Maker's iconic bottles. The colors look very nice against the rolling green fields that surround the distillery, and when I caught up to the tour group I wasn't surprised to find that the tour guide's outfit stuck to the theme as well. The tour guide was a sprightly, grandmotherly lady who seemed to really know her bourbon and really enjoy her job. After briefing the group on the history of Maker's Mark and its founding Samuels family she led us into the main production building.

Here we saw the corn, malted barley, and red winter wheat used in the production of Maker's Mark. Maker's claims that its use of red wheat, instead of the more typical rye, is responsible for the smooth, non-bitter flavor of their whiskey. We also saw (and dipped our fingers in) the mash vats full of fermenting mash and the stills used to double-distill the fermented mash into raw whiskey.

From there we went to other buildings where we observed the bottling, labeling, 'waxing', and boxing of the finished product. The wax cap really is applied to each bottle by hand. At the time I was there they were waxing special edition bottles for the Fourth of July with red, white, and blue wax. I've started to see these bottles in my local liquor store in the past few weeks, packaged as a boxed set with one bottle of each color.

We finished our tour in one of the barrel houses where we heard the intricacies of Maker's aging process which is based on waiting until the whiskey tastes 'ready' rather than aging it for any specific amount of time. Finally, the barrel house led right into the gift shop and bar where we were treated to a taste comparison of Maker's Mark pre- and post-aging. Since I had just tasted several un-aged whiskeys a few days earlier at MB Roland, tasting the raw Maker's was a nice comparison. While the raw Maker's wasn't bad at all, you could tell that it was distilled with the intention of being barrel-aged, and I found the finished product much more enjoyable.

Since my visit Maker's Mark has introduced a new line of whiskey to the market, a first for them in their 52 years of operation. It's called Maker's 46 and is a uniquely finished version of standard Maker's Mark, as opposed to a wholly different product (see more on that from bourbonblog.com here). The next time I'm in the area I'll have to stop in to hear about this new product and have a taste. I'm sure it is well worth the long and winding drive.