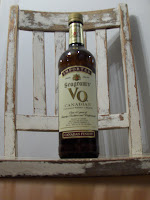 Like many whiskey drinkers who I know, I often skip right past the Canadian whisky shelves of my local liquor store. For some reason Canadian whiskies seem to lack the character and personality of their Scottish, Irish, or American counterparts. Maybe it's just poor marketing or the fact that they're mostly packaged in very uniform, boring bottles, with the exception of Crown Royal and its wide, squat bottle in its purple velvet pouch. Or maybe I'm just biased against Canada.

In any case, my expectations are always low when tasting a Canadian whisky, but occasionally one will surprise me. Today the surprise comes from Seagram's VO blended Canadian whisky. VO has been around since 1913 and is a 6 year old whisky bottled in one of those tall, boring, brownish bottles. I've been drinking VO for a while, but I can't remember ever sipping it for taste. I usually use it as a mixer for whisky sours or other drinks where the flavor of the spirit is masked behind other, stronger flavors. As I poured myself a glass tonight I expected a drinkable, but uninteresting whisky - lucky for me those expectations were a bit off base.

The nose on VO doesn't do anything to raise expectations. The scent is pretty weak and what smell I did detect is mostly rubbing alcohol with just a little oak and vanilla in the background. As I took a sip the first thing I noticed was how smooth and easy-to-drink the VO is - perhaps this is why it makes such a good mixing whiskey. Blended whiskies are supposed to be smooth, so mission accomplished there. The nice thing about VO is that it also has enough flavor to keep things interesting when enjoyed on its own. I picked up the vanilla and oak tastes again, along with a rich, buttery sweetness that carried through into the mellow finish. The finish was the thing that surprised me most - the VO stays with you for a nice long while with the oaky taste fading to sweet butter and finally to a light minty heat.

At about $15 per 750mL bottle VO is an affordable whisky that is ideal for mixing and good enough for sipping on its own when you're looking for an easy, smooth drink. Its lightness makes it an ideal summer-time whiskey and a great way to ease first-timers into whiskey drinking.

Hi Jim, I like your site and your reviews. I would have never thought to try Seagram's VO if not primarily for coming across this post. Luckily, I just bought a 50 mL sample for a dollar. I thought is was dreadful! I don't think I'm totally a whisky snob, as there are other whiskies I'll drink neat that are also under $15, but I just couldn't stomach this one. You're right that it's smooth, but there is something horribly cheap-boozy on the aftertaste that builds up after a few sips. Anyway, I still like your blog, but I thought I'd put up this warning for anyone else who reads this!

Me again. I just forgot to mention that Ralfy (ralfy.com) also reviewed Seagram's VO, and didn't rave about it but also found it drinkable, which contributed to my trying it. So, you're not crazy!

If you'd like to try some GREAT Canadian whiskies, try the Canadian Club line. Skip the regular 6-year "standard" CC. The other varieties, the Reserve Triple-Aged, the Classic 12-Year Old, and especially the Sherry Cask, are TERRIFIC!!

I don't think you are biased against Canadian whiskey my friend, as I also find them terrible. 7 crown is garbage, even for its price, and I drank it for years before I knew what good whiskey was, simply because my father drank it. I still prefer nip whiskey though.