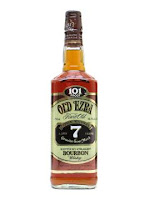 Ezra Brooks is one of those bourbons that tries to look like Jack Daniels - square black bottle, mention of charcoal filtering, etc. The other is Evan Williams and both are decent, value-priced bourbons produced by Heaven Hill in Bardstown, KY. I think the standard-issue Ezra Brooks 90-proof is a solid bourbon for the price, if a bit rough around the edges. So when I picked up a bottle of its older cousin - Old Ezra 7 Year Old Bourbon - I expected it to hold its own in the $20-$25 price range in which it competes. I can say that I wasn't disappointed, and that it is actually a fairly unique and enjoyable bourbon, although it could still be mistaken for a bottle of Jack if you weren't paying attention. My instinct is to compare it with a similarly priced bourbon like Maker's Mark or Buffalo Trace, but at 101 proof the Old Ezra 7 Year is a totally different animal than those smooth whiskeys, and might better be compared to other higher-octane bourbons.

Color: Old Ezra 7 Year Old has a very rich, reddish brown color that makes it easy to believe it is at least seven years of age. A very warm looking whiskey, no hints of lightness or wateriness.

Nose: For 101 proof the nose isn't super boozy. The first thing I picked up was a nutty scent like hazelnuts and then some vanilla and banana notes.

Flavor: 7 Year Old Ezra drinks nice and smooth, especially for 101 proof. It has a nice oaky warmth and all the nutty flavors that I picked up in the nose. There's some nice vanilla flavor and a thick feel to this whiskey. It's not at all fruity or light - again a serious, power-punch of a bourbon.

Finish: The finish is long and peppery. The 101 proof gives a nice warming sensation without any harsh burn.

Overall this is a nice sippin' whiskey for when you need a serious spirit.

It should still be fine as long as the bottle is still closed & sealed (might be ok even if the bottle's open, but you never know what's been tampered with in that case...). If I had that I'd probably do a side-by-side tasting next to a new bottle of Old Ezra to see how they compare.

Old Ezra 101 is one of THE best values in a higher-proof bourbon out there!! It's $10 less than that 'Turkey' brand, and tastes MUCH better. 'Standard' Ezra Brooks (90 Proof) is one of my regular sippers, so I HAD to try the 101, and so far, I LOVE it!!! To paraphrase Ferris Bueller, "It is so choice. If you have the means, I highly recommend picking some up."