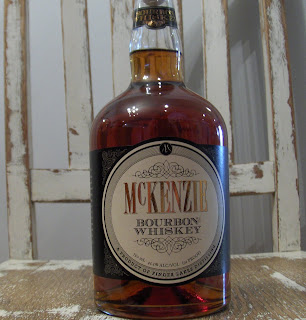 As promised in last week's post about my visit to Finger Lakes Distilling, I'm finally getting around to a proper tasting of their McKenzie Bourbon Whiskey. Based on my tasting at the distillery and one glass that I've had since, I have to say that my initial impression of this bourbon is very good. I'm especially surprised at its complexity given that fact that it's aged for only 18 months, barely enough time for the spirit to experience the full four season temperature cycle that is so important working the oak flavor into bourbon.

To offset the short aging period Finger Lakes Distilling uses 10 gallon oak barrels that ensure much more wood-to-whiskey contact than standard 53 gallon bourbon barrels, which is why the distiller claims McKenzie tastes more like a five-year-old bourbon than a mere 18 month old. After tasting it I wouldn't fault them if they pushed things a little further and claimed that it drinks like a 6 or 8 year old - it's certainly on par with widely available 8 year olds such as Jim Beam Black and Basil Hayden.
In addition to using small barrels, McKenzie Bourbon owes some of its flavor to time spent in used chardonnay barrels sourced from the wineries in the region surrounding Finger Lakes Distilling. Wine barrel finishing has been used by Scotch distillers for years, and many Kentucky bourbon houses have recently begun experimenting with barrel finishes. However, sherry or red wine barrels seem to be a much more common choice for finishing whiskey than the chardonnay barrels Finger Lakes Distilling uses. Adding even more unique flavor to the McKenzie bourbon are the locally-grown corn and rye varieties that are ground on-site at the distillery before making their way into the bourbon mash.

The first sign of good things to come with McKenzie Bourbon is it's dark chestnut color. I tend to like darker colored bourbons and the richer, woody flavors they usually carry. Dark bourbons like this one are especially good in the summer because they can handle a little ice without tasting watered-down. After pouring a glass, the nose can't be missed. It has a strong scent of oak and a sweet fruitiness (think raisins or prunes) that I assume comes from the chardonnay barrel finishing. While the nose is full and warm, it's not overpowering and, at 91 proof, contains none of the harsh, rubbing alcohol scent of some higher-proof bourbons.

When tasting McKenzie the first surprise is how smooth and mellow it is without tasting weak or watered down. It's easy-drinking all the way through with only a very slight bite as it goes down. The tastes are similar to the nose with lots of oak flavor and some sweet maple and raisin tastes. There are also nice smoky, toasted grain notes that hint at a higher malt content than you find in lower-end, corn-heavy bourbons. McKenzie Bourbon's finish is long and mellow with long-lasting oak and nutty flavors, perfect for a nice slow savoring.

Craft-distilled bourbons are always hit-or-miss, and this one has only been available for a few months, so the high quality is down right impressive. I applaud Finger Lakes Distilling for taking some chances and creating a very unique bourbon while still maintaining much of the classic bourbon flavor profile. Based on the various sized barrels aging at the distillery when I was there, I'm guessing there are more unique whiskeys on the way from Finger Lakes Distilling, and I look forward to trying those, as well as their McKenzie Rye that has received some great reviews of its own.

I was very lucky to be in the area a few weeks ago and tasted the bourbon, rye and maplejack at the Finger Lakes distillery. I am by no means an experienced taster but I thought the bourbon was spectacular. Wanted to taste it before spending $50+ on a bottle (typical shelf price in the Binghamton area).

Have you been able to taste the McKenzie Rye yet? I don't have much rye experience although I do like Jim Beam's. The McKenzie was dry/bitter and I thought the flavors just clashed. Oh well! Not sure how much gin you drink, but Finger Lakes' Seneca Drums is beautiful. And have you tried their Glen Thunder yet? Hope you like corn!

Dave,
That bourbon is really good, especially for a relatively young one. And I haven't had it since summer of 2010, so I'm guessing they're getting even better at making it. I have had the Rye too, and I agree that it's not the best...I thought it had a funky tang to it that just didn't fit.

Anyway, I agree that their gin is great too, but I haven't tried the Glen Thunder or Maplejack, so I guess I have something to look forward to next time I'm up that way.

You might be interested to know that the distillery is now selling kits: two bottles of white dog and a small barrel. They say your bourbon will be drinkable in 3-6 months. Not sure how similar the white dog is to the Glen Thunder.