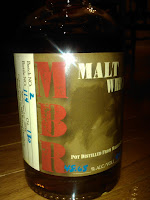 This is the second of my three-part American craft-distilled malt whiskey tasting. My first was Edgefield Distillery's Hogshead Whiskey from Oregon, and today I'm tasting MB Roland's Malt Whiskey from Kentucky. The MB Roland distillery is just outside my hometown, and you can read about my visit there by clicking here. Their malt whiskey is a very small batch product, and is totally unique in that the mash bill is not 100% malted barley, but a blend of malt, rye, and corn with malt being the majority grain. It is also aged in new, charred oak barrels like a bourbon which is unusual for malt whiskeys.

This unique recipe leads to one of the most singular whiskeys that I have tasted. It is unlike anything else; charting its own little path down the whiskey road. This is precisely the type of innovation that small distillers like MB Roland can bring to market, and I applaud them for trying something so innovative.


*Note: My bottle is (hand-) labeled "Batch 2", so I assume you might have a slightly different whiskey if you try an earlier or later batch.

Color: The first sign that MB Roland Malt Whiskey is unique is its color. Even as a young whiskey it is darker than most Scotches and other used-barrel-aged malt whiskeys. It also has a deep reddish tint mingled in with a more traditional golden amber color.

Nose: The nose on this whiskey is REALLY NICE. It's one of those whiskeys that you start to enjoy as soon as the cap comes off the bottle and the aromas hit your nose. There are hints of dark berries, cherries, the vanilla of charred oak, and hints of sugary burnt stuff - like a campfire with burnt marshmallows.

Flavor: The flavor is very unique, but I didn't like it quite as much as the nose. There were char flavors - burnt toast and vanilla - and a peppery spiciness. There was also a lot of heat in the first few sips - a moonshiney burn accompanied by a moonshiney, earthy taste in the back of the mouth. Adding an ice cube mellowed things out a bit and brought out more wood flavors.

Finish: The finish is peppery with a slow, dry burn as it fades away. There are also hints of dark malted barley and the same earthy flavor that showed up throughout lingers for a while.

Overall, I'd say this is a whiskey with a GREAT aroma that disappoints a bit as you move on to actually drinking it. But it's also one of the most unique whiskeys that I've tasted, so the bits that don't appeal to me might be your cup 'o tea. It's definitely a whiskey that I would keep on my top shelf just to blow people away with the luxurious, one-of-a-kind aroma that wafts up from the bottle.