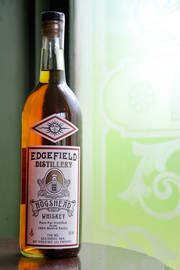 I noticed recently that I had accumulated a few bottles of small-batch, craft-distilled malt whiskeys, so I thought I'd taste them all, three posts in a row, and offer you a comparison. First up is Hogshead Whiskey from Oregon's Edgefield Distillery. Edgefield Distillery is part of the McMenamins empire which operates hotels, pubs, breweries, wineries, and theaters throughout Oregon and Washington. Hogshead Whiskey is made in a small, dark, barn-like distillery at the Edgefield resort property that McMenamins operates in Troutdale, OR.

Hogshead Whiskey is a very small batch product distilled from the same barley malt used in some of McMenamins' beers, and aged 'to-taste' in used barrels. It is available at any of McMenamins' pubs or restaurants or at a couple of the hotel gift shops, but that's it...so don't get your hopes up about finding a bottle at your corner liquor shop. Here's what I think about it:


Color: Hogshead is a beautiful clean and clear amber color, not too dark but enough color to convince you that it's been well-aged. It even has a nice oily look to it when you swirl it around the glass adding to the luxurious look-and-feel.

Nose: The nose of this whiskey are very unique, but quite nice. My initial impression was that it was very boozy, with a bit of burn, but that faded to a crisp, clean hint of ethanol as the whiskey sat for a minute. The aroma then shifted to a very floral bouquet very much like a hop-heavy beer with notes of lavender, oranges, and citrus candy. A Malty scent added to the beer-like nose.

Flavor: Again, the whiskey started off with a lot of bite in the first few sips, but that mellowed out gradually, and dropped off completely when I added an ice cube. The flavor is richer than I expected based on the nose with sweet, dark flavors of toasted malt and sweet orange marmalade. With ice it became smoother and even sweeter with malt and bitter chocolate notes. Again it has an overall essence of beer.

Finish: The finish was long and warm with a grainy cereal taste and lots of oak tannins. The changes in this whiskey's character from initial aroma to flavor to finish is remarkable, but it's pretty enjoyable throughout.

Overall, this is a good, but not phenomenal whiskey, and for the price ($32.50 for a 750mL bottle) there are plenty of good alternatives. However, Hogshead is definitely unique, and given how limited the availability is I would suggest you give it a try if you find yourself at a McMenamins pub or hotel. If you like hoppy beers and want an easy transition from your favorite IPA to your favorite Scotch, then this might be the best whiskey for that particular mission, although McMenamins also makes a hopped-whiskey called Monkey Puzzle that might be even better for that task.