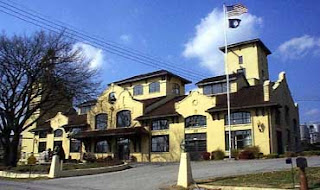 This year for Christmas I made the long drive home from Philadelphia to beautiful Western Kentucky. On the ride back I broke up the monotonous drive with a stop at the Four Roses distillery in Lawrenceburg, KY. I have always been intrigued by Four Roses' history and mystique. Not only is there a romantic story behind the Four Roses name (read the official version here), but also a unique history of at least 120 behind the brand. Four Roses was one of America's most popular whiskeys before prohibition. Then it was unavailable for more than 40 years in the U.S. before returning in the last decade and gradually regaining its place among America's top bourbon brands. During that time the Four Roses name graced all sorts of different whiskeys, but now the distillery is back to focusing strictly on producing classic Kentucky Bourbon.

The Four Roses Distillery is located a half-hour west of Lexington in rural Anderson County Kentucky. It sits near the Salt River from which it sources limestone-rich water for use in fermentation. The distillery was built in 1910 and features Spanish Mission style architecture that earned it a place on the National Register of Historic Places. The yellow and red color scheme of the buildings matches Four Roses' labels, and serves as a gentle reminder of which of Kentucky's distilleries you're at. Speaking of other distilleries, the old, black barrel-houses across the road from Four Roses are now owned by Wild Turkey. Four Roses ages all of its bourbon in single-story warehouses in Cox's Creek, KY and sold the old multi-story barrel-houses after dropping its non-bourbon whiskey lines. This is one of many curiosities that has arisen due to the Four Roses distillery changing hands numerous times over the years. The tour guide didn't delve too deeply into the brand's long and winding history, but I was able to learn a bit by listening between the lines, and the gift shop carries the recently published Four Roses: The Return of a Whiskey Legend

, which gives a more complete history of the brand.

The distillery tour here starts in the visitor center with a video that gives a quick run-down of the whiskey-making process, and shows all the distillery's parts in operation. After the video the tour guide explained Four Roses' unique blending process. They create ten different bourbons by using two different mash-bills and five different yeast strains. They blend all ten recipes to create the entry-level Yellow Label bourbon which I reviewed a while back. Four Roses small batch is a blend of four of these bourbon recipes, and the Single Barrel is an unblended expression of the high-rye recipe. Next, our group of a dozen or so headed out into the December chill to explore the distillery itself.

My impression of the Four Roses Distillery is that it feels old (it did just celebrate it's 100th anniversary). It's not as polished as the Maker's Mark Distillery, but this gives the tour more of a 'hard-hat tour' feel and I didn't feel like they were trying to gloss over or hide any of their production processes or dress things up too much for tourists. We got to see (and smell) the tiny grain testing room. We saw the grain elevators and mashers, and then went around, up, and down the well-laid-out main distillery building to see all the steps of the distilling process in order.

One thing I saw here that I haven't seen on other tours is the large tanks of culturing yeast. These were interesting because I could really smell the difference in the various yeast strains that they were preparing. The actual still was being cleaned on the day I visited, but we were able to see and smell the fermenters full of mash, and walk all around the large column stripping still and the doubler still. Since the barreling, warehousing, and bottling are done at the Cox's Creek site we weren't able to see those processes, but tours of that site are available if you call ahead.

After the tour we went back into the visitor center for a taste of the final products. We tried the standard yellow-label Four Roses, the Four Roses Small Batch, and the Four Roses Single Barrel. All of them were very good Bourbons, and brought unique flavors to the table while maintaining the smoothness that Four Roses shoots for in all its Bourbons. Unfortunately they wouldn't let us taste any of the 'not-for-America' bourbons that are so popular in Japan and Europe, but they did have a barrel with a few drops of 20+ year old bourbon in it that I was able to smell, and that was quite a treat in itself.

If I'm ever in the area on a warmer day I'd like to spend more time exploring the distillery grounds - there seemed to be a lot of beautiful buildings and landscaping that just didn't shine on the gray, snowy day that I was there. Oh well, it's always nice to have an excuse to return to a distillery!

Build your own tour. You select the number of stops, locations, and restaurant. Choose from winery tours, brewery tours and mixed distillery tours. You are in charge of the days events. Let Little bus tours be your driver. private group tour temecula